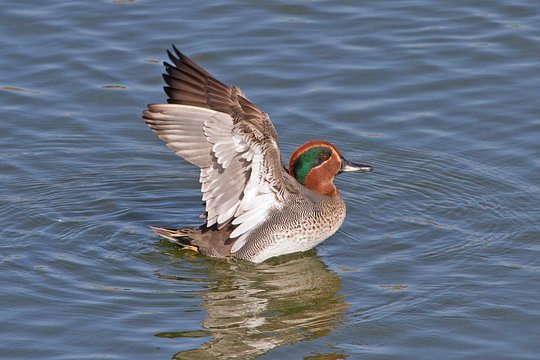 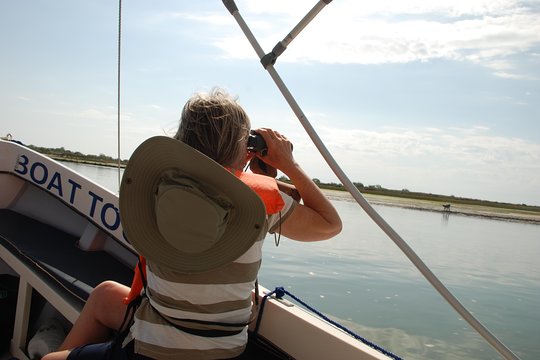 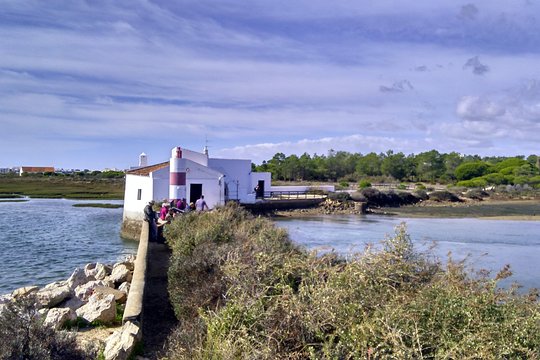 No meals included on this day.
Accommodation included: Hotel 4**** in Tavira

Stop At: Quatro Águas, Estr. das 4 Águas 107K, 8800-602 Tavira, Portugal
The Tavira salinas consist of numerous tanks, channels, creeks and drainage ditches. In autumn and winter the large tanks on the south side attract large numbers of waterfowl.
The tanks are a popular high tide roost for waders and gulls and Greater Flamingos can usually be found. It is a site best visited at high tide.
These are home to numerous wading birds at high tide including Dunlin, Little Stint, Curlew Sandpiper, Sanderling, and Kentish & Ringed Plover. Common Shelduck can often be found on the bunds amongst the roosting Lesser Black-back & Audouin’s Gulls.
Little Egrets and Kingfishers may be in the channel on the left and Spanish Sparrows often congregate on the fences. An Osprey sometimes perches on the poles eating fish and a Peregrine might fly past as it searches for prey.
The road to Quatro Águas is bounded on the east by Salinas and then the River Gilão, on the west by an extensive area of Salinas, creeks and disused fish farms and on the south by the tidal Tavira channel.
The pans are best at high tide but the channel is best at low tide when the mud and shell fish beds are exposed.
It is sometimes possible to see the six common species of gull found in this area, including Audouin’s and Slender-billed Gulls, on the same pan. Caspian Terns can also be found. Grey Herons, White Storks, Little Egrets and Spoonbills are often seen here.
Duration: 5 hours

Stop At: Quinta de Marim, 8700-225 Quelfes, Portugal
The Natural Park is state managed and the headquarters of the Ria Formosa is here. Currently the entrance costs 2.5€ and you can obtain information about the fauna and flora either at the entrance or at the headquarters building. There are sign-posted trails around the park.
The park is an area of approximately 40 hectares comprising salt marsh, saltpans, Mediterranean scrub and pine forest, freshwater lagoons, beaches and mudflats. With such a range of habitats it is possible to see a wide range of bird species.
If you are visiting in the spring look out for orchids in the wooded areas and in the summer months look out for Mediterranean Chameleon.
Duration: 4 hours

Stop At: Castro Marim and Vila Real de Santo António Marsh Natural Reserve, Portugal
A day visiting the Reserva Natural do Sapal de Castro Marim e Vila Real de Santo Antonio, an enormous area of wetland, saltmarsh and salt-pans at the eastern end of the Algarve which is home to a wealth of birdlife. One of the major attractions here are the Greater Flamingos at least some of which can be found all the year round. A varied selection of gulls, wildfowl and wading birds can be expected in spring, autumn and winter.
At the “Cerro do Bufo” saltpans it is possible to watch several species of water birds, including the Audouin's Gull, Little Tern, Collared Pratincole and Yellow Wagtail (spring/summer); Shelduck, Shoveler, Black-necked Grebe and Caspian Tern (Autumn/winter).
All year round it is possible to find Flamingos, Black-winged Stilts, Spoonbills, Greenshanks and Avocets. Kingfisher is regular at this location and, during migration times, Black Tern often turns up.
The Slender-billed Gull seems to be a regular visitor here during autumn and winter. In the surrounding areas, it is possible to find Stone Curlew and Little Bustard, along with a passing Garganey. Crested Lark is a resident in this area.
The saltmarsh and the salt-pans are located near the Interpretative Centre/Headquarters for the Castro Marim Nature Reserve and are the best place to observe Caspian Tern, Common Redshank and Black-winged Stilt.
According to registered observations, there have been recent sightings of Red-necked Phalarope in this area.
Duration: 5 hours

kkirksilva
10
We enjoyed every minute of it
Very well organized. Easy walking in low lying coastal Algarve, staying in the same hotel throughout. We enjoyed…
Read more

jonasdexter
20
very relaxing
We took the tour on a cloudy day since it was a bit cold for the beach, and it was a great choice. The driver…
Read more

Andy G
10
Family trip
We chose this tour because it had an historical accent, although a bit afraid that the kids would get bored. But…
Read more